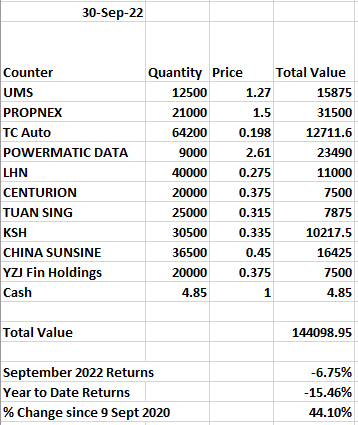 Slight surprises there as the portfolio has plunged more than the STI (Around 2.72% in September)

I would attribute it to the 2 factors below

1) Uncertainty over the new housing cooling measures. In short, this is likely to affect people who want to downgrade from private to public and are above 65. It is also likely to affect people who woke up and decided to take a loan to buy their house as the loan to value for HDB is reduced and the increase in medium term interest rate floor used to compute Total Debt Servicing Ratio (TDSR) and Mortgage Servicing Ratio (MSR).

Personally i am not an expert but i believe if someone wants to buy houses because they believe the annual appreciation will be higher than the current interest rates despite the increase in rates used to compute the ratios, they will still want to buy it. Also, on the developer side, this might mean more focus on quality projects and whether the room sizes and layouts are suitable for the owners as they are more wary in switching houses.

Nevertheless, if someone wants to buy a resale HDB for a bigger space, they would still have to do it and while the path to repay might be longer, they might be able to refinance again when rates are lower down the road (not sure when but i believe it should go down by 2026? lol)

With interest rates on the rise and we are likely to raise rates even if recession occurs as inflation is the issue, there seems to be a lack of any reason to be optimistic for now. Therefore, in line with broad markets, the STI would have been said to be already more resilient compared to other country counterparts.

In terms of changes to the portfolio, there will be no changes made even though there could be a case to be made to switch propnex out due to the recent measures but i feel it is jumping the gun too soon.

Company in Attention in September SATS

A company that has caught the eyes of many in the public is SATS. In fact some folks are starting to ask if there is any basis to make an entry into this company that most are familar with the brand name.

I will try to sum up what i think of the acquisition from what i have glanced through.

The acquisition will cost 1.75 billion SGD (though it might fluctuate depending on the exchange rate of euro to sgd). SATS currently has a market cap of around 3.45B. Hence this is definitely a huge purchase as it is >50% of its market cap.

My worries about the acquisition are as follows

1) SATS is in a relatively healthy financial position with net cash of $252 million. This deal would likely turn it into a relatively net debt company as it has to take over the debts of the acquired company. An estimate Net Debt / Ebitda of 3.4x will occur based on SATS estimations against its current 0.5x.

2) The recent drop in share price even before the equity raising price is announced would mean that current shareholders are not benefitting as there will be more shares raised if price keeps falling. Even if the drop is covered by debt, it is not encouraging in such environment

4) The main business of SATS is still unprofitable. Clocking in a negative EBIT of 34.3 million and profit after tax of -22.5 million for 1Q FY23. The main focus should be turning the boat in its current business instead.

6) A competitor in the field, Menzies was acquired earlier for a PE of around 18 and EV/EBITDA of 4. Compared to the SATS acquisition of PE 18 and EV/EBITDA of 9, I would say SATS probably overpaid as the PE did not factor in taxes as the net income after tax was not given.

In conclusion, the fall in share price is probably justified as folks do not want to be badly priced out in forking money for the acquisition. Whether the business acquired will create the effects SATS wants will remain to be seen but the overhanging effect on the stock is likely to last to mid 2023 where the acquisition should be completed by then or at least until the exact equity financing details are announced