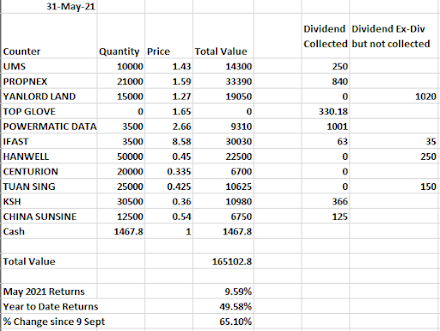 -Satisfactory Results. Good Growth on Revenue. Dividend declared however remains on the low side.

-Worth noting that the company has an unprecedented level of inventory that is highest among the past few years. While if that signals an uptick in demand in the upcoming months it remains to be seen. In previous results this trend seems to have held.

-Macro trend of weakening of USD affects the company

-Setting up a subsidiary for its property rental segment. Signaling a disposal?

-'In recent days, a major European Union member country have applied our latest 11x (Wi-Fi 6) products to a public project This project is ongoing since FY2021 and into FY2022. It has made material contributions to both financial period's revenue and profitability. These developments will contribute to both revenue and profitability' This could signal a good FY 2022 and following which more projects using powermatic products?

Conclusion: Would still remain in the portfolio, adding more to the position would not be a bad option for consideration. Especially its one of the times whereby the prospects look rosy in its commentary.

-Took a 12.8 million fair value loss. Resulting in a loss.

-However, it has not taken in any potential qualifying claims from cost-sharing relief under COVID-19 (Temporary Measures) Act 2020 for existing construction projects. Future claims would be offset against cost which would mean a better margin hopefully

-Considering the backdrop of a circuit breaker, the company has been resilient

-Gaobeidian in early days. 500+ units sold across a targeted amount of around 50 000 units in the whole project

Conclusion: Would still remain in the portfolio, but would want to see more sg property projects associates and joint ventures moving forward. The long term thesis of Gaobeidian still exist.

It has been a volatile month of May so far which is rather unsurprising given the 'sell in May' syndrome as well as the SG Markets has been 1 of the better performer this year.

How should we position the portfolio moving forward?

Sectors to avoid (Ranked according to my own thoughts)

Aviation - With the mutation in Covid 19 Variants and the travel bubble being postponed yet again, its rather safe to say 'uncertainty' is a word that the aviation industry will have to deal with and as such i am not very keen as an investor to deal with uncertainty. While the instant gratification in medical breakthough might occur like it did in 2020, this is something out of the hands of many to model and predict. As such i would gladly avoid the industry which will likely have very tough times ahead.

Stock to avoid in SGX for this sector will be Singapore Airlines (SIA).

Hotels - Similar with the explaination above, i believe that the rediscover vouchers and staycation effect will unlikely bring hotels to a profitable level that is anywhere near pre-covid. Unfortunately if tourist are not arriving in Singapore then the hotels in Singapore will unlikely benefit as well. While hotels based in other countries such as China might benefit, generally i struggle to think of a pure play hotel reit or company that is currently listed in Singapore.(Not accounting for the possible listing of hotels by greentown china according to rumours) Hence i will likely stay away from investing in this sector as well.

F&B Services - The industry has always been a margin thin industry due to huge amount of competitors and the difficulty in hiring labor without increasing cost as much. With the recent covid implications, a double whammy is formed as companies would struggle to increase manpower when restrictions are lifted while they would also be hard-pressed when restrictions are imposed. As such, while good food can guarantee the company to survive by innovations through good marketing on social media and deliveries, it is unlikely to drive shareholder returns. Despite that, certain listed F&B Companies recorded profits and paid dividends in 2020 all thanks to large government support. Such initiatives are unlikely to be seen in 2021 and should not be relied on as a catalyst for returns.

Stock to avoid in SGX for this sector will include Jumbo , Soup Restaurant and RE&S Holdings

Banks - A little controversial and hard-pressed decision. I believe this can go 50-50 because the economy is in a pretty down situation and a value hunter will say buy when the economy is bad so u can take profit when the economy is good. However the current prices of banks in Singapore are actually near all time high and does not reflect the economic conditions. While i acknowledge the economic conditions moving forward should be in the form of a 'tick' shape and will get better, i do not acknowledge the valuations seen and as such would feel that a better return could be found elsewhere.

Sectors to be Optimistic (Not ranked)

Shipping - Its a pretty known fact that shipping stocks have gone crazy since the end of last year and as such will likely to ride on the trend further. In comparison of Singapore Shipping Companies to those in listed in Taiwan and Hong Kong, Singapore has lagged behind. While the main factor could be due to the lack of big name counters for investors to have their interest in, i believe their profitability should reflect when the results are released.

Stocks include SamuderaShipping and Uni-Asia Group

Brokerage - With covid and stay home being an increasing trend, there would likely be more time for people to get their hand-on on financial markets at home. Also this provides an opportunity for folks to use their saved up income for travelling to invest and plan for the future as well. Brokerages will likely ride the tailwinds of the extended stay home trend.

Tech Manufacturing - Its a 50-50, the tech manufacturing sector has showed resilience in 2020 and has produced good results and returns. As such, with the stay home trend continuing, one would expect these industries to benefit from the increased demand as well. Being essential services companies, these companies are likely to be less affected even if there is another round of circuit breaker.

However at the same time certain companies have showed corporate results/decisions that isn't to my liking. For example, AEM guided a similar revenue but profits has fallen a lot in 1Q 2021 compared to 1Q 2020. UMS has underwent an impairment in 2020 Q4 but has decided to acquire JEP, which has went into a loss making position due to the aviation sector being affected badly. However, its Q1 2021 has showed continued growth from previous quarters which affirms the growth trend.

As such, i would say that if one believes in the plans of these companies then they would be attractive valuations to get into.

Stocks to ponder about - UMS and AEM

Moving forwards, the chopy markets is likely to sustain. Even though the STI has recovered from its flash minor correction last week, i do think there is more of such corrections to come. 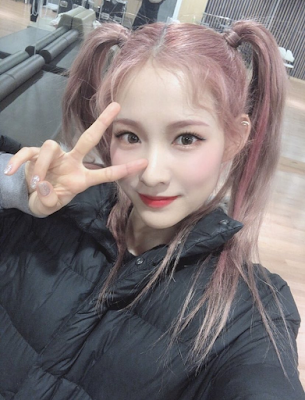 (Mood after looking at the updates) 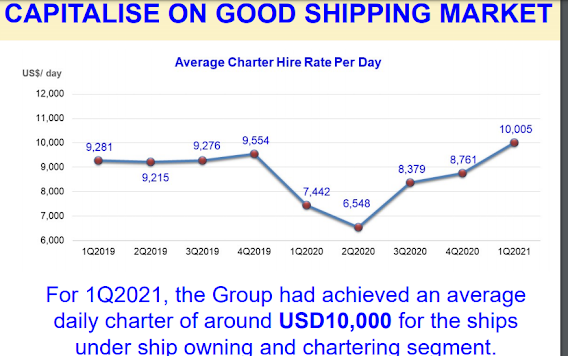 Probably the most important slide of the whole business update would be this slide. 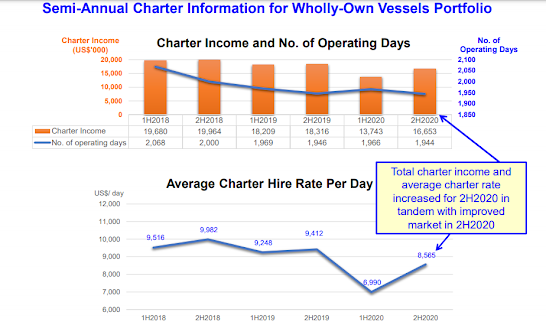 This should result in 9.83 million USD in Revenue

Considering January is a month whereby the Baltic Dry Bulk Handy size Index is below 1000 and it has only risen to above 1000 in the last few days of February, this result is pretty decent

Moving forwards, although we have not hit the heights of March, April figures are above 1000 and May's figure up to 11 May are also above 1000 (Increase since End April)

As such while i do not want to estimate the revenue again as it might not be accurate, it should turn out fine. Along side the disposal recognizing small gains. We should see a profit and dividend when announcement is made in August.

Unfortunately i was unable to fill my order today. Will see how it pans out next week.