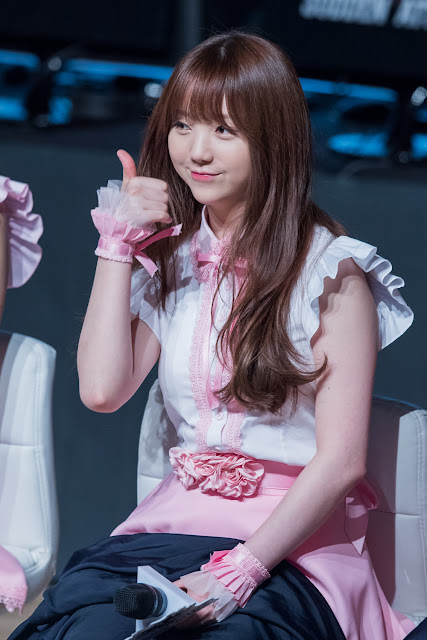 2019 has been a relatively lucky year as I have done very little compared to recent years yet the returns was the better one.

Perhaps laying low and doing little was a correct call after all especially how bad the 2nd half of 2018 has been.

On the other hand, I attended more concerts than the previous years as well. In 2020, I hope to attend more than I have done in 2019.

On the bright side of things, as a whole I still pumped money into the portfolio. 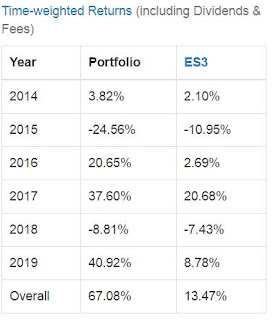 My thinking would be that 2020 would likely be a year with returns much lower than 2019 and I have to be mentally prepared.

Since I have hit a target I have set midway this year, I would have to agree with what I would do if I hit the target....and that is to continue another year.

I can't say if it's a good or bad thing to continue for at least another year, time and hindsight will tell the story in due's time.

At the same time I would have to source for some new ideas and review some of my past ideas and assess if they should be added into the portfolio.

Many thanks to readers of the blog as well as those who have showed their support to me this year. I wish everyone a happy, prosperous and healthy 2020 ahead.

3 Companies on my watch list with YTD 20%< loss, should I buy them?

In a year where the index has recorded a positive returns year, one would possibly consider bottom fishing for counters that have done badly this year.

I will be sharing my thoughts on 3 counters that have done badly this year, each having a year to date return of at least -20% 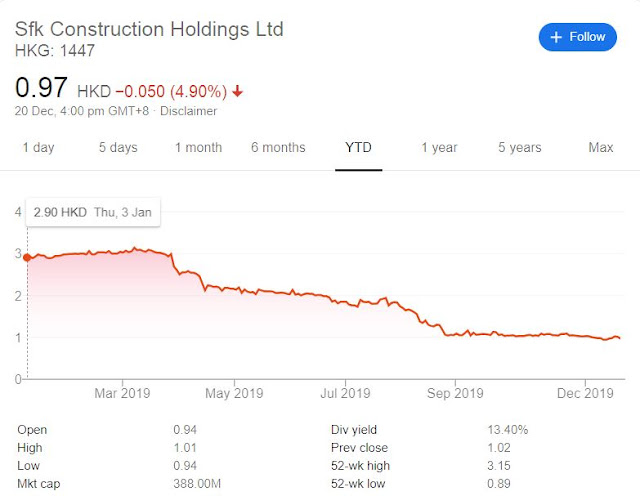 ·        YTD returns: -65.89%
·        A construction company based in Hong Kong, the company had seen tough business conditions which lead to its margins being eroded.  Gross profit margin fell from 4.28% to 2.5% while net profit margin fell from 2.2% to 0.47%
·        Various reasons were quoted in its profit warning announcement. Mainly replacement of non- performing subcontractors, unexpected prolonged period of inspection of works done and certifications of payments resulted in higher financial cost and lastly projects of higher margin were completed in the period resulting in lesser contributions

A: Nope, personally I am not a fan of construction business in general as the margins have always been low. To quote Build King's annual report, to achieve a profit margin of 3% will have been remarkable, SFK has been unable to do it which represents a risk.
Furthermore, the announcement seems to indicate that the order book for SFK will have lower margins going forward unless it secures higher margins projects.
Given its revenue trends, the company probably has an order book worth of 1.5 to 2 years. With a lower profit forecast, the PE is not a safe measure. 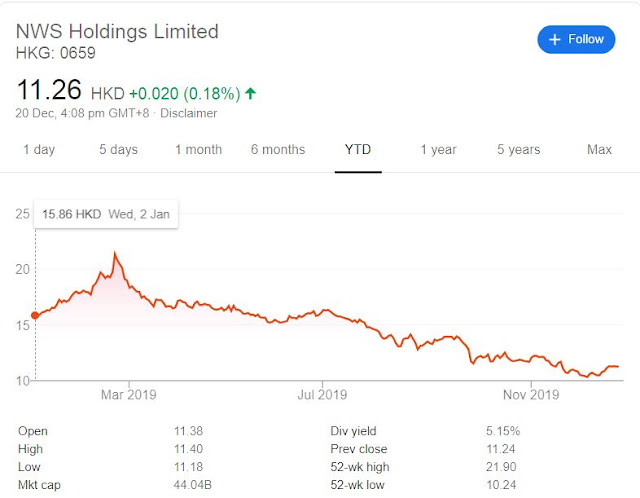 ·        YTD returns: -26.88%
·        Followers of my portfolio might find this counter familiar as i have briefly held it for a period of time(2017 Sept to 2018 May). Bought at HKD 15 and Sold at HKD 14.48 with HKD 1.43 dividend.
·        A conglomerate with business based mainly in Hong Kong and China, it has segments in roads, aviation, construction, facilities management and transport. Its most recent acquisition includes purchasing of FTLife Insurance a insurance company in Hong Kong.
·        Some of the more notable to public names would be management of Hong Kong Convention and Exhibition centre in Wan Chai, New World First Bus, one of the 2 largest bus brands in Hong Kong. The other being Kowloon Motor Bus (KMB) which is also listed as Transport International. 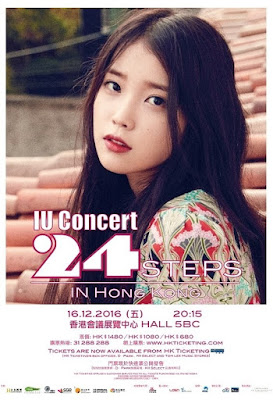 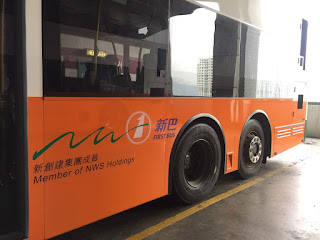 A: If I have a time frame of 3 years at least, I would be tempted to purchase this counter. The reason is that most of the company's segments are doing fine and the new acquisition of FTLife at a purchase price of 50% of its market cap would prove to make or break the company.
However, the transport and facilities management sectors have raked in increased losses and in the near term i foresee it is likely to continue. With increased wages, fuel cost and  the hk protest, revenue would be affected for its bus business while capex would be required to maintain the vehicles. Also its duty free and convention centre are likely to suffer from reduced visitors into Hong Kong and the accessibility of exhibitions during weekends. Coupled with increased agreed capex into the convention centre as part of a new operation agreement, the headwinds are definitely there.
In conclusion, if the timeframe is at least 3 years, I would definitely be keen to buy it. But in my own portfolio management there is more to ponder about adding a position into the portfolio apart from it being a good idea in the long run. 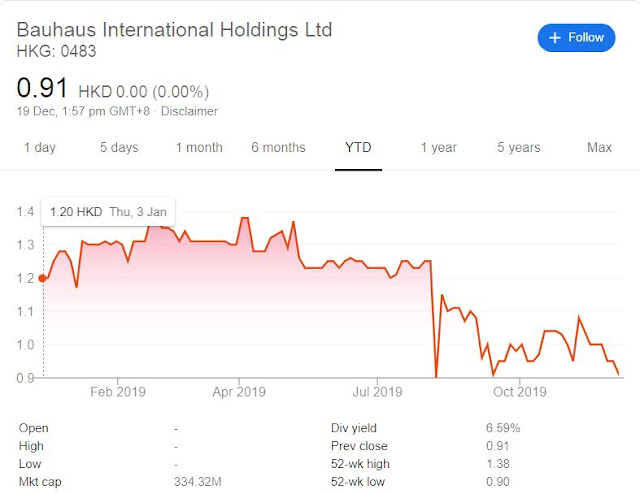 ·        YTD returns: -24.84%
·        Clothes retail outlet operator in Hong Kong, China and Taiwan
·        A company which has consistently shown losses in the first half of its results (from March to Sept). It has recently shown losses in the second half of its results as well, something that was not seen in the previous year. The explanation for a usually better 2nd half results is due to Christmas and Lunar New Year period. 过新年, 买新衣带新帽.

Q: At a dividend yield of 6.5%, would this counter be a good counter for bottom fishing?

A:Its quite a straightforward No.
1) Earnings are negative.
2) Retail landscape for Hong Kong is bad and I would worry if they would be able to pull through the current chaos having recorded bad results even when there was no chaos.
3) My memory of their outlets in Hong Kong is that they have been doing discounts and are not crowded. 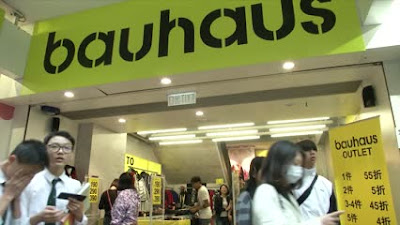 Sometimes bottom fishing is never an easy thing to do. One has to think if the company is able to do well in the long run and assess carefully. Furthermore if 1 is on board a company which has fallen 30-50% in a year, a lot of work has to be done to decide if averaging down or cutting loss is the more appropriate actions.

With this i end off with a quote.

You look god-like if you had averaged down and subsequently you make over 50% as it rebounds over 100% but you look like an idiot if it continues to fall another 50-60% after a 30% fall. Whether you are able to do the former on a more consistent basis would be key. But then again no one wants the shares to keep falling after you had bought it. Unless you did not buy enough initially then subsequently any upside would not please you.