On 15 Feb 2019, Singpost announced acquisition of remainder of 21.1% shares in Jagged Peak as the owners have decided to activate their put option. The consideration to be paid for the shares are   US $10.59 million + US $1.75 million (only if a customer debt is recovered).

Food for thought
In the Annual Report 2017/2018 it is stated that 'The consideration for the 28.9% under option is dependent on the audited average earnings before interest, tax, depreciation and amortisation (“EBITDA”) of JP for the 3 consecutive financial years ending 31 December 2015 to 31 December 2017. The fair value of the consideration at the acquisition date was estimated at S$13,809,000 based on a multiple of forecasted average EBITDA for the relevant financial years and estimated net debt of S$6,731,000, discounted at 2.9% per annum. The maximum amount that the Group is expected to pay to the key stockholders of Jagged Peak will be S$33,163,000 if the above mentioned criteria are met.'

While it would be difficult to run the numbers as the exact method of deriving is not told, it can be said that the amount paid is close to half of the maximum. I won't think that the performance is ideal. If it was the put options might not have been exercised as well.

Introduction
This post would attempt to briefly value Singpost using the balance sheet and many assumptions.
Singpost is the dominant local mail provider in Singapore with its headquarters situated at Paya Lebar.
In recent years, it has gone on an acquisition spree with as many as 11 companies under its Goodwill.(Goodwill is the excess paid over book value for acquisition of a company)
This has allowed Singpost to expand its logistics and eCommerce business.
It has also revamped a portion of its headquarters at Paya Lebar into a retail mall.
However, the results of logistics and eCommerce segments seems to be declining in recent years.

Valuing Singpost's discount rate
In determining the discount rate to be used, we would use the rate of return required on equity and debt. As Singpost has perpetual on its balance sheet, we would need to account for those as well.

Tax rate used will be 17% . Assume return of equity to be 15% as a personal target for investing via stock picking.

Logistics
Method of estimation, using discounted cash flow for bull and base case.

Key Concerns
Postal:  Business may not continue indefinitely as the license needs to be renewed periodically.

Property: Estimation of bull case profits increase of 6% could be overly optimistic

Logistics: Business estimation is definitely very difficult as profits for these 9 months of FY 18/19 are very low resulting in margins that are way lower than previous years.

eCommerce: Losses may continue and affect divestment price as these negative profits will reduce equity and in turn reduce assets. This would hurt the divestment value of the segment.

Food for thought
In FY18/19, the company has moved its self storage business (General Storage Company Limited) from Logistics segment to Property Segment. As such it becomes harder to estimate the commercial property rental. 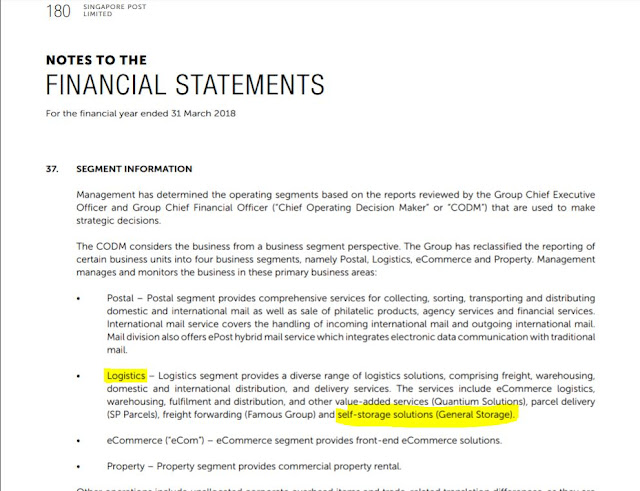 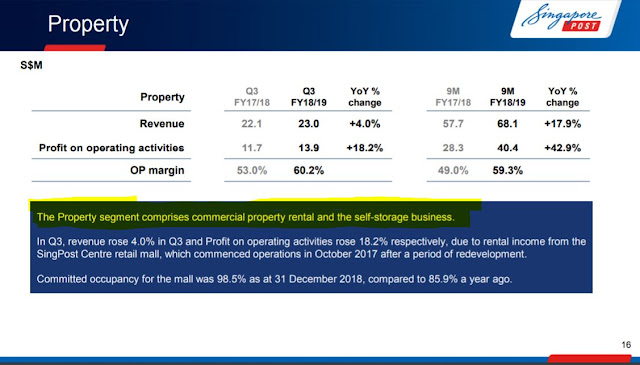 I would practice my patience and wait for a purchase price of $0.59 to occur. This would give me a 15% upside to my bear case estimations which is in line with my 15% return on equity set earlier. Any upside that will improve the valuations will have to come from a surge in margins of logistics business or a turnaround in the e-commerce business.

Alternatively, a good exit value of the acquisitions made will improve the net asset value of the company and improve its balance sheet by reducing intangibles. 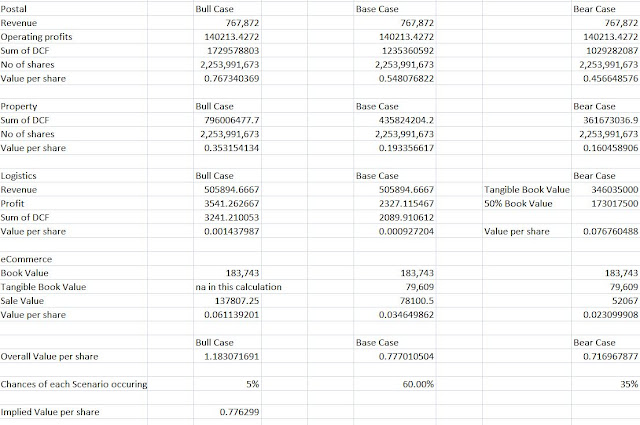