Keppel T&T has been a subject of takeover at the price of $1.91 by Keppel Corp. The announcement was made on 27 September and lets take a look to try to assess if the deal is fair. 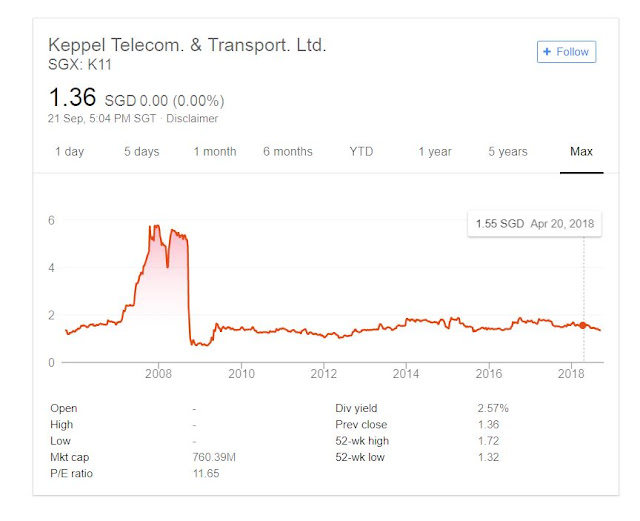 From a psychological point of view, the offer price seems to be a win for anybody who has bought the shares since 10 October 2018 as the highest price ever since then would have been $1.88. 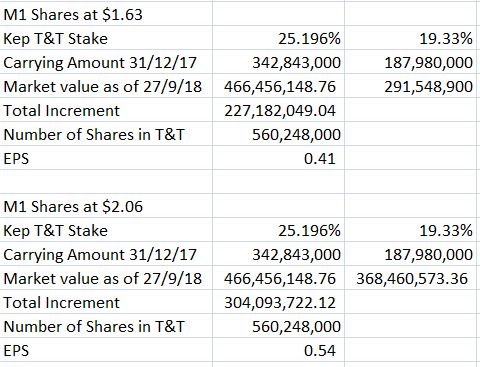 Personally, I do think that should the M1 deal go through, the takeover price of $1.91 seems lackluster as the full market valuation of M1 at $2.06 is not flown through to minority holders of Keppel T&T. However, if the M1 deal does not go through, $1.91 would look like a much more attractive takeover offer.

However, the offer has been priced decently that most if not all shareholders since October 2008 would walk away with a smile knowing that they at least broke even while some would record good gains. The same however cannot be said for M1 Shareholders.


Tat Seng Packaging- Results has been good with a 35.8% yoy increase in results. Moving into September, the price of paper packaging seems to have held stable around the 4000 mark which could indicate a stable gross margins moving forward. The 2 main worries would be 1) yuan depreciation as it might affect the comprehensive income moving forward. 2) Trade wars (effectively most companies can have this as a reason)

Uni-Asia Group- Having covered the results in the previous post, i would continue to be positive on this given its Hong Kong investments have been largely positive and more of its Japan residential projects are to be recognized in 2H. Nevertheless the main worries moving forward will be 1) Natural Events affecting Japan for prolonged periods affecting the hotel business. 2) Dry Bulk Rates heading southwards.

Mainland Holdings- Results has been fine, with a single digit % fall in profits. The trading division turned around a profit in 1H 2018 compared to a loss in 2H 2017 but its profit is way lower than 1H 2017. Looking forward, it seems to be a work in progress with its factories undergoing expansion in Bangladesh and consolidation of operations of 1 of its trading companies under a single building.

Wai Kee Holdings- Results has been good, thanks to Road King, which has turned in a very high gross profit margins. Personally the purchase has been due to the fact that the market cap of Road King and Build King exceeds Wai Kee itself. Build King has seen growth in its 1H 2018 which is encouraging. The worries going forward will be 1) 'Yuan Depreciation' affecting profits. 2) Weak domestic consumption leading to property slowdown. 3) Dwindling construction books in Build King due to Significant delays in the award of Government Contract

Dongyue Group- The profit increase has been in line with industry average. I would continue to monitor the industry competitors to assess if the company would continue growing its profits. Personally i do think that the 2H18 profits will be similar to 2H17. This gives it an attractive yield and very low PE. However, the company operates in a cyclical industry and it is very likely to be affected by macro growth in China.

PC Partners- The results showed strong growth in its own brand products. This has in turn improved its gross and net profits. However it has guided weaker demand in the 3Q 2018 and demand will likely only pick up in 4Q 2018 alongside the release of the new Nvidia rtx graphics card. Accordingly, its taiwan competitors has indeed recorded lower sales in the first 2 months which seems in line with the guidance given. The sales of Nvidia's new graphics cards alongside the sales of its taiwan competitors will be something to monitor in the upcoming months.


Listed below is a company that i might want to take a deeper look across the next few months.