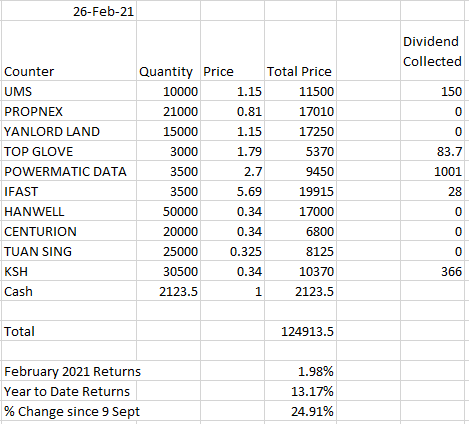 UMS - Shocking 4th Quarter creates a drop in share price on the last trading day of the month. However I remain positive on the long term trend, as such it would still remain in the portfolio.

Propnex - On paper looks like the better company compared to APAC Reality, a comparison article i would consider penning my thoughts when i have the time. In short, results are excellent and with travel not resuming any time soon as it seems, housing would be a good investment tool with low interest rates to stay for a little longer.

IFast - Good Results but it seems like its very volatile as investors seem to regard it as a tech stock. Will have to see how well it grows its AUM and more details on the E-MPF and how much stake they have in it.

Hanwell- Originally was going to exit and take profits in this stock after a remarkable increase the past few months. However, was totally caught off guard with the potential spin-off of Tat Seng Packaging. As such, holding this stock and see how things turn out will be the choice. On the results front, 2H out performed 1H as it was widely expected. Hence there was no surprises on that. However the dividend was a bit disappointing as it could have been higher.

Centurion - Operationally did ok and fair value losses due to sluggish demand of its student hostiles (due to lock down and lack of flying to study abroad) were expected as well. The demand should remain stable for workers dormitories. The lack of dividend is understandable given it has been in the headlines for a big part of the year. 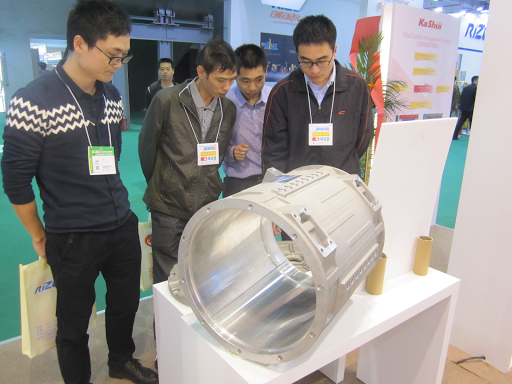 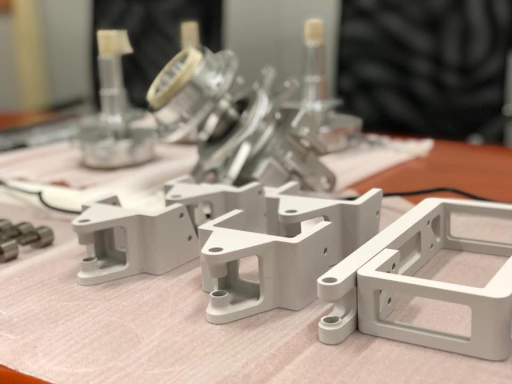 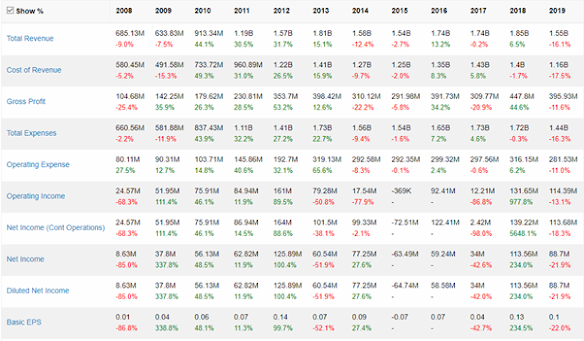 A company that has recorded profitability in all but 1 year from 2008 to 2019. I would consider it impressive as it has recorded a profit even in 2008 where the global financial crisis happened.

Perhaps a red flag will be fluctuating earnings across years and 2015’s unprofitability that has to looked into deeper on why so the case. 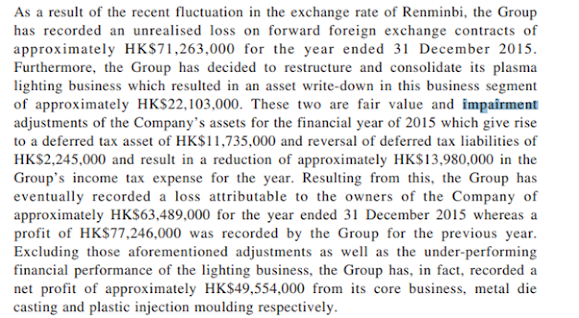 In 2015, the company has recorded unrealized loss for foreign exchange contracts of 71m and 22m of impairment. Which when after accounting both one-offs, resulted in a loss.

However, this worry can be chalked off as in its 2019 Annual Results, it has done away with the forward contracts. 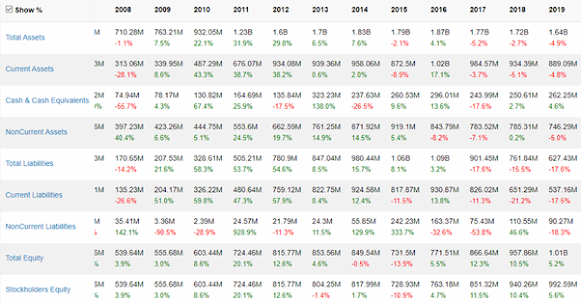 From the snapshot, current ratio has always been above 1, equity has always increased apart from 2015 where it was unprofitable.

Looks ok to me. 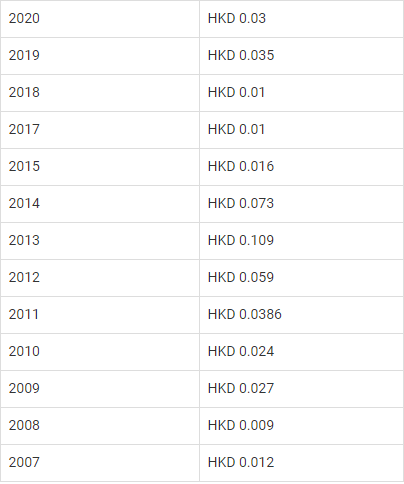 Solid Dividend Record with a Knack of rewarding shareholders every year. Apart from 2016 which it was unprofitable for the year ended 31 December 2015 which is understandable. 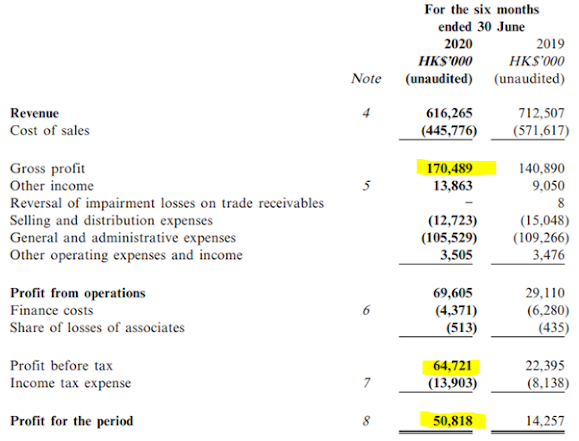 Recent results have been a blast and a huge boon. With the company tripling its profits on the back of margins improvement. Its something good to see as it highlights that the company’s manufacturing processes has improved and could be a sign of potential earnings value.

Even if not counting the other income, the company is on track for a better year as it tends to have more orders in the 2nd half of the year.

Is it time to buy buy buy then?

Unfortunately, there is potential red flags to consider before we jump into such a counter.

Unfortunately, in what is supposedly looking like a record year, the controlling shareholder has decided to exit the shares at a price of 0.7358 to 0.8546. Although reasons are unknown as it could be for personal reasons, it looks kinda shady and profit taking. It is the main reason why the price has crashed and is trading at 60 cents today.

2) Appointment of a CEO capable of crashing share prices.

Sounds a bit misleading but a new CEO was named and will be taking over from 1 February 2021. Chu Weiman who is previously the CEO from the trading division of Leeport (Holdings) from September 2016 to December 2020. With engineering background, surely it is relevant to the industry they are operating in.

Unfortunately, the track record of the trading division is as follows

Although 2017 and 2018 was profitable, 2019 lost all its profits and the loss trend did not reverse in 2020. Hiring such a person to lead the company moving forward, I have my doubts. The sole bright side would be that the controlling shareholder (Lee Yuen Fat) will remain as the chairman of the board.

In October 2016, an announcement was made whereby the company will sell a subsidiary along with the land and building to its controlling shareholder. In the very complex deal, it has been mentioned that it gives shareholders the opportunity to consolidate its production lines and realise the fair value of the group’s investment in the land and property with a gain.

However, a question would be if so why would the land be sold back to the owner instead of the open market then? Well your guess would be as good as anyone’s.

The company is cheap based on current valuations and should the 2H 2020 thesis occurs. On its website it has also been collaborating with a few parties such as XPeng which opens up its exposure to the electric vehicle industry, a new up and rising trend in China.

However, a few structural issues remained even though on paper it has rewarded shareholders almost every year since 2008. 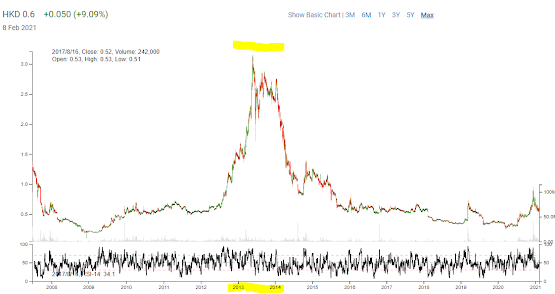 The highest stock price came in 2013 and 2014 whereby dividends were at their highest. Whether such high amount of dividends would occur again would be anyone's guess but at least the trend is that the dividends go with tandem with good results and there is a decent chance there will be good results.

Unless a guidance is given, and some explanation is given in some briefing with regards to the major shareholder selling the shares. If ever i would take up a position, it would a small portion for punting. A large position would be unlikely due to the lack of info available.