The poor performance should not be unexpected as majority of my portfolio is in Hong Kong and i have made a few poor decisions this year as well.

The last 3 months of 2018 has seen little buying as i slowly shifted to focus on other aspects of life.

Nevertheless total assets(cash+ equity) amounted to a high 5 digit sum which i felt i was lucky to end with such amount.  I could have done much much worse if not for a great deal of luck.

Moving into 2019,  I foresee myself slowing the pace of investing and probably focus more on other aspects of life.

However, i would still likely be blogging about my investing thoughts.

Yay Factors
-Rail Ridership higher than 2017 by about 8%
-Bus Contracting Model should benefit operators more
-Approval of 4.3% increase in fares.

Nah Factors
-Rail Operations still loss making
-Possible loss of Bus Packages in future(Next would be in 2020)
-For a company that trades at around 11 to 12 Forward PE, the possible expiry of bus packages from 2020-2026 do not seem to reflect a good price

Food for thought
-Despite a 0.21% increase in average daily ridership from Q1 to Q2, revenue increased by 16.8 million or 5.36%  quarter on quarter and segment profitability of public transport improved by 30%. This could be due to the new bus contracting model for SBS's Seletar Bus package coming into play. The bus package started from 11 March 2018.
- With Bukit Merah Bus package coming into play at a similar tender price to Seletar's, would we see another modest improvement in Public Transport Sector?

Nah Factors
-Inventory of unsold properties in SG one of the highest among the various companies
-M&C Hotels PLC seems to have struggled this year.

Food for thought
-Seems to be a proxy for any Singapore Property Policy reactions.
-Bulk of profits still comes from Property development in Singapore
-There seem to be no new sales of New Futura from Oct to December, which could imply that vacancy rates remain same at 19% and imply poor sales of current ongoing projects. 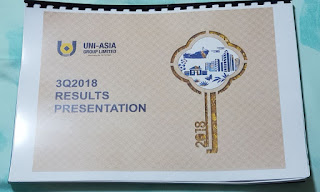 Will jot down my observations and thoughts here. This is an add-on to the previous post found here

Hong Kong Property Projects
- 2nd project will still have gains to be recognized in 2019 as there are 2 floors left not sold (2nd and 3rd floor retail related) and  some money is still with the consortium the group invested in.

- The current aim would be to invest in more projects but at a lesser amount than their 2nd project which they invested USD 10.4M.

-This way the income would be more recurrent as the projects are slated to complete in 2019,2020,2021 and etc if more projects are invested into

Japan Property Projects (Alero Series)
-IRR of each project is minimum 20% so far, the invested amount is roughly 3 to 5 million USD.

- Aiming for 6-8 projects a year. (This could imply perhaps around 3 million USD profits per year?)

- Would only focus on having projects in Tokyo as that is where population is increasing.

Japan Vista Hotel Management
- Operates on a 'management' basis hence they take into account the revenue and expenses of each hotel. Expenses do include paying to owners of the hotel a fixed or variable cost.

- The invested equity is roughly 3 million and hence the returns on equity is good although on a revenue basis the returns look mediocre (48.9 million revenue in 9 months of 2018 but 171'000 profits)

-5 Hotels opened this year and accounted for 1146'000 pre opening fees. There would be no pre-opening expenses in 4Q as the next hotel opens in end 2019.

- Current year of operations is not in a stable stage which the company hopes to achieve and aim for 2.5m USD profits in a year.

-However with IFRS 16 to be implemented in January 2019, this will result in higher upfront cost and affect P&L of hotel operations. This is due to incorporation of assets on the balance sheet along with lease liability which results in right of use depreciation +    Interest expense

-Currently has 4 containerships. 1 is on the balance sheet as cost-impairment basis. Book value estimated to be 14 million. Market value slightly lower at the moment but has not hit impairment levels. The current market for containers does not seem to bode well and further impairment losses would likely occur across 2018 and 2019.

-As for the dry bulks, the ships are on a mix of spot+ long term charter basis.

-As IMO 2020 approaches, ships will have to use low sulphur oil or install scrubbers. On handymax vessels which account for all but 2 of Uni-Asia's dry bulks(which are supramax), installer scrubbers are impossible due to size of ship being too small. Hence low sulphur oil has to be used and the cost is likely to be shared among various parties despite Uni-Asia being an owner.

-1 of the supramax ships will be installed with scrubbers which is requested by the current charterer of the ship. A scrubber is estimated to cost 2-3 million dollars. There is likely not much financial impacts arising from this as the increase in charter income would likely be offset by depreciation arising from the installation.

My thoughts on Bajaj Auto


Recently had a round in a job interview where i was told to write my thoughts on the
company Bajaj Auto.

Unfortunately my write-up was unable to allow me to progress to the next round, nevertheless i have decided to attach my write-up on the blog while biding my time to write some other articles.

*Personally i do feel that my write-up was pretty bad but if given another chance to re-write it, i am not sure if i would have wrote it much different. I guess i still need more practice and advice.

Despite a falling trend in margins from FY 14-15, Bajaj Auto has still managed to maintain higher margins compared to its 2 wheel rival (Hero Motocorp) and 3 wheel rival (Atul Auto). Hero Motorcorp is the market leader in 2 wheels and would be an appropriate comparison. In the 3 wheel space, the 2nd and 3rd in market share are Piaggio and Mahindra and Mahindra Limited but both companies are not used in the peer analysis as Piaggio has derives more than half its revenue(53.68%in FY17) from Western Countries while Mahindra and Mahindra Limited derives revenue(roughly 32% in FY18) from farm equipments as well.
Conclusion
In Bajaj Auto Limited, I have seen a leader(Rajiv Bahaj) who has been able to turn around its company and create superior margins over its competitors for the past years. He has also been candid in admitting his mistakes such as having too many variants of Discover which lead to a decrease in the company's market share. The company has prided itself on its R&D(which Rajiv Bahaj started in 1996 with 4 young engineers then) and with its high cash position is primed to carry out more R&D in the near future and explore innovations in its automobile products and processes to drive further value in the bottom line.
However, my concerns would be in its balance sheet where it has a huge amount of investments in mutual funds, bonds and debentures. Should there be a large currency depreciation, the company's asset value would decline sharply and largely affect foreign investors who are invested in it.
Similarly, an increase in credit risk of companies in India which could lead to higher default among companies would affect the company's investments negatively  and impact its operations and valuations.
Posted by zzxbzz at 05:44 1 comment:

Some thoughts on MediNex IPO

-The company engages in procuring of medical and pharmaceutical products as well.

-Lastly, it provides Business Support Services to companies outside of healthcare industry

- Good Revenue growth. Company has grown its revenue very well in recent years.
Half year of FY18's unaudited pro forma revenue is 4.941m which is 90.2% of revenue in FY17.

-Steady balance sheet. At 30 June 2018, total liabilities stood at $1.155m,.Company has roughly $3.376m worth of cash with $0.4m in fixed deposits. The company definitely has enough money to maintain operations and pay off its liabilities

-High amount of goodwill. The company has gone on an acquisition spree in recent time. As a result this has made goodwill an astonishing amount of $2.741m as of 30 June 2018. This is roughly 38.96% of the company's balance sheet.

It initially acquired 50% of AccTax at $375,000  at which the vendor provided a guarantee of Profit After Tax of $450,000 for a 3 year period if not it would pay five third of the shortfall. This translates to an acquisition guarantee PE of roughly 5 (taking into account 150 000 each year and 100% is at 750,000). It does look like a very good acquisition on paper but on 5 November 2018 it acquired the rest of the 50% for $750,000 (Yup double of its initial purchase). With that i am unsure if the initial profit guarantee still holds. From the picture below it seems like AccTax is still lost making in 2017. 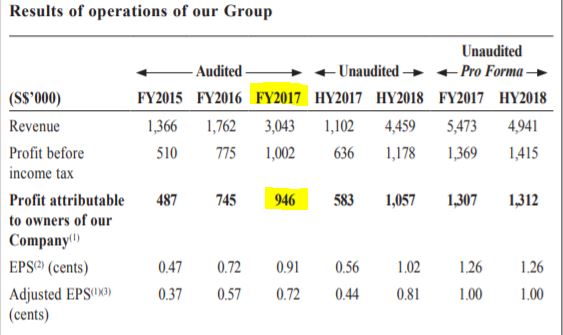 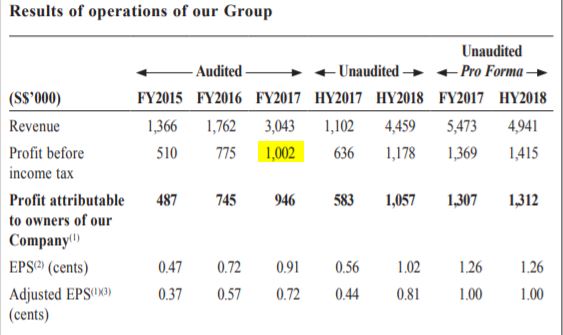 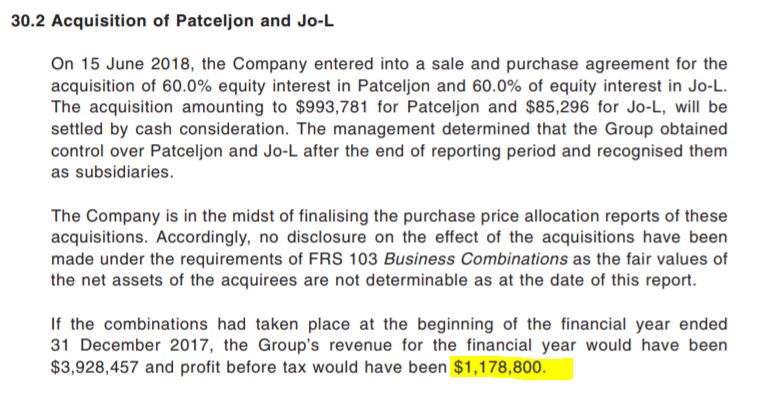 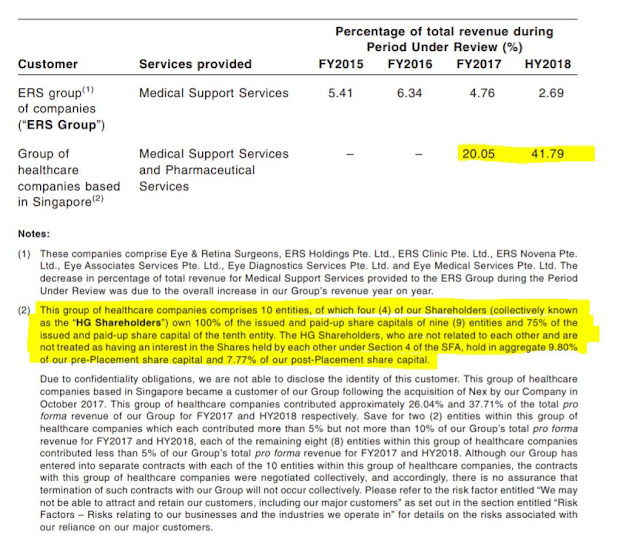 While its definitely good to have some shareholders as your customer since it is likely they will continue using your services, its hard to estimate what the impact to margins will be in such cases. Furthermore a large increase has been due to these group of shareholders and it poses an interesting question to profitability of these increased revenues.

On initial glance, 1 Cent EPS for 1H 2018 and implying a layman 2 cents EPS for FY 18 results in a placement PE of 12.5 which seems to be very attractive if the company can continue its growth momentum in the following years.

However, the recent results seems to indicate a break on its growth engines for at least 1 quarter and implies that the PE will unlikely be 12.5

Furthermore the acquisitions has been weird in my view and the raising of $5.32m when the company has 2 million spare cash.

Lastly there has been no details about the P&L of Ark Leadership which investors can assess whether this acquisition is at a good PE. Interestingly Ark Leadership is owned by the sister of the CEO of MediNex.

This company (alongside HC Surgical) would unlikely be in my considerations for buying.....