Continuation of the previous post. The portfolio's results for September has came in. 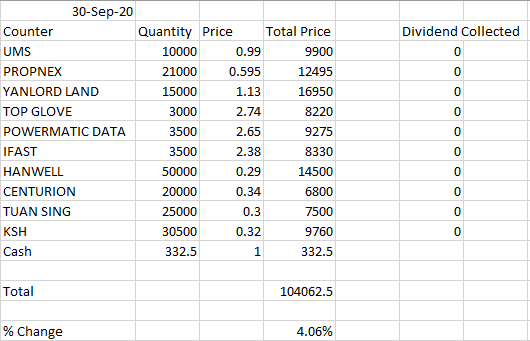 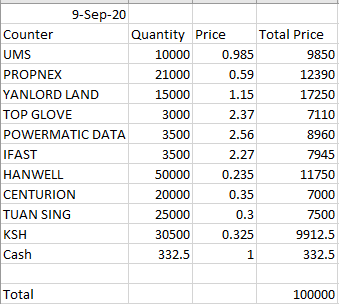 Returns came in at 4.06%. Pretty good for an imaginary portfolio set up on 9 Sept.

Main driver of returns came from Hanwell and Top Glove.
There would be no changes made to the portfolio as of 30 September.
Awaiting to see how it does in October.

Unfortunately i do not have the amount currently. But if i did it would look something like this.

Ums- In my opinion its a stable semi-conductor play with decent dividends. One of the few companies that has produced better results during the covid landscape as well.

Propnex- In the low interest rate landscape, the text book answer would be property. However choosing pure play developers are too difficult and might require more groundwork into various projects held by different developers. As such, it might not be bad to go with the market leader in the middle man industry of property in sg.....Propnex.

Yanlord Land- Cheap in book value terms, my personal bias is china property even though there has been recent curbs whereby the government is likely to set some restrictions such as net gearing has to be below 100% and unrestricted cash/ short- term debts has to be more than 1. The gross margins of Yanlord will come down but its sales volume has been increasing which is encouraging.

Top Glove- I added it for some thrill, personally its just allocating a part of the money to thrills. Though its not a position if i purchase, i would hold for a longer term than 9 months.

Powermatic Data- The 5G growth story should still hold despite a weaker 2H than 1H, while the recent capital reduction has somewhat been lackluster, earnings improvement should be the key driver in driving the value of the share price.

Ifast- Probably one of the most used portal to purchase funds, bonds etc. It has tremendous offerings on its portal and has been expanding in not just Singapore as well. Along side a possible digital banking license approval would likely mean that it becomes a one-stop financial services platform. The growth in assets under administration ( 12.5% in 6 months) is very remarkable. Recurring net revenue have shown growth which is good in adding consistency to its earnings

Hanwell- Under valued consumer goods play with packaging business in china that i particularly like a lot(tat seng). The recent buying of shares by insider at 23.5 cents has caught my attention as well.

Centurion- Did not declare a dividend in 1H despite stable results. Probably was the right thing to do as covid circling around its dorms had been talk of the town in 2020. I predict there will be stricter policies in the dormitories and companies such as centurion who are prepared will be able to take advantage of this by either charging a higher price as competitors are not allowed to operate due to being unable to meet the policies or centurion might be given more contracts to mange more quick build dormitories. The fact that Centurion has won the contract by JTC and there is a need for such dormitories is likely an indicator of demand for dormitories is present and centurion is probably a good supplier.

Tuan Sing - Recent proposed disposal of 39 Robinson Road will bring in a decent profit of around 1/3 of its market cap currently.  The company is definitely worth more than its share price currently although it remains to be seen when more value will be realized. 1 example will be its Gul Tech that has done well in china recently.

KSH - As mentioned before in a post some time back,  the gaobeidian thesis is still there although it will likely take a long period before all units are sold and as such the gains have to be 'discounted' in a way. It has moved into doing property developments via joint ventures and associated to obtain a higher margin. The main bread and butter business of construction has had solid order books although what the margins will be remains to be seen. Tender Price index have recovered since the lows of 2017 hence it remains to be seen if the recovery in tender price will improve margins. This company would be my pick among the construction companies as it has ventured into property development, has the highest exposure to gaobeidian and did not diversify too much into unrelated business such as education etc.