Starting the year with a Bang. -16% on a position 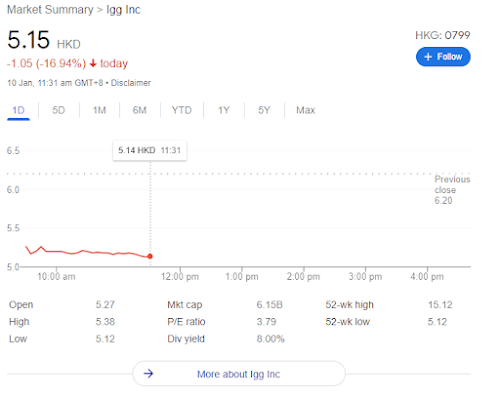 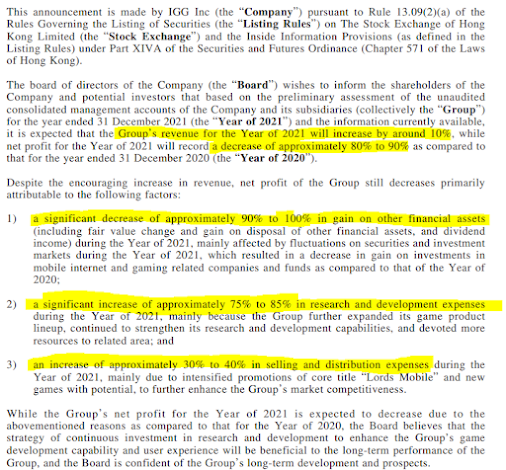 (Highlighted in yellow are the key points)

Following its profit warning announcement on 7 January 2022 where it has estimated a 80% to 90% drop in net profit for 2021 compared to 2020. This is despite a 10% increase in revenue in the same time period.

This has sent the shares diving around 17% today (10 January 2022). As the position on friday was 5.34% on the portfolio, this dive has inflicted around 1% of the overall portfolio. An early CNY gift.

Is the fall justified?

Therefore 2H 2021 is unprofitable even if the other net gains are excluded. This is due to the increased spending in R&D, marketing expenses as well as lower revenue in 2H 2021 than 1H 2021.

Hence i feel that this fall is probably justified as the 2021 2H Results is really a disaster. The drop in revenue compared to 1H 2021 was fore coming as per my previous post. However, the spending proportions increased significantly.

I had some time in the weekend to think it through. I feel that the decision by management to go into a loss making position in 2H 2021 is not something i am comfortable with. This loss making position is already accounting that fair value investments are not accounted for. Although 1 can be said that this is investing for the future, IGG's value preposition to me has been a good dividend payer and at the same time it is able to use the rest of the income retained to invest and venture into new games.

However, it has decided to extensively increase manpower and acquired building for game development as well as spend much more on research and development. This in turn with its increased in marketing expenses and lower revenue in 2H resulted in the loss making position.

With ample financial resources on hand, they can continue to do this for a year or two but this is unlikely to be good if they cannot find a new dominant game.

Yeager has been mentioned previously. I have seen some good comments on its game on discord and is encouraged by the recent signs. However, i believe that it would take a good 3-5 months more before it would even go public with its games. Considering that the beta has just started at end of december and an end date has not ended yet.

In lieu with the change in management direction to not put net profit as a focus, i have decided to make the painful decision and cut the position to move the funds to another stock that might do well.

I believe the year is still early and there can be a couple of risks that i can take. IGG would need some time to recover and most of the recovery is likely via its new game Yeager.

Will i be able to overcome the early deficit of 'no profitable days of the portfolio since start of January' and the big bang boom of a -16% realized loss in January and do well in the upcoming months? Or will this be the telling sign that the lost of motivation is starting to hurt and i should consider quitting?