Will jot down the key takeaways as well as my thoughts about the results. 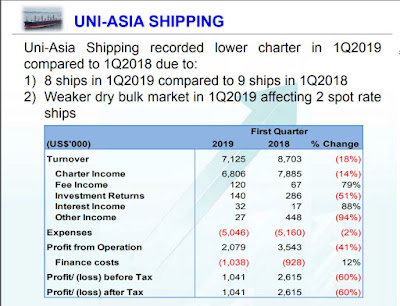 -As per weakening sentiments in the dry bulk rates, the revenue came in lower and 2 of the spot rate ships were originally part of a pool of ships that were under the management of others for charters. That arrangement did not yielded results that were expected by the management and were changed to a model index linked charter to the BHSI. As most of the ships were under long term charter, the results remained decent.

-Looking at the dry bulk rates up till end of May,  i think the charter income should come in at worst case of -10% to 1Q 2019 results. That should still mean that the segment is profitable. Though the key factor affecting revenue would be how much improvement the change in ship arrangements would bring. 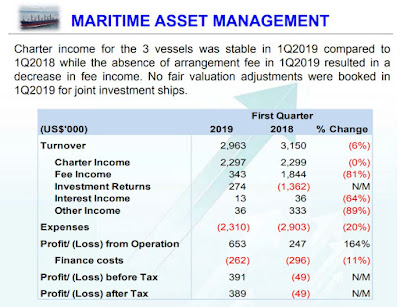 -Following repeated fair valuation adjustment downwards in 2018, there were no adjustments in 1Q 2019 which is a plesant sight. Furthermore, the total investment on the books has been reduced to 5 million USD from 5.8 million USD at end of 2018. This is due to a return of investment of 1 million and recording roughly 200 000 as seen in investment returns. All in all, the risk exposure has reduced which is good to hear.

-Though a key concern would be still how expenses are above the charter income even though it has come down a lot.

-This part of the business is hard to estimate but i do hope that they continue similar results throughout the year. 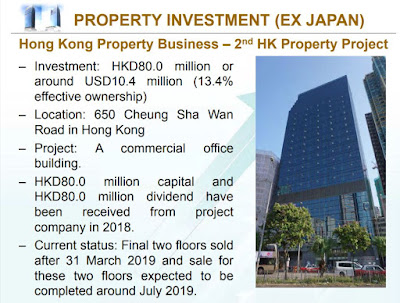 -The 2nd project (CSW 650 also know as China Shipbuilding Tower), an office building in Hong Kong still has 2 floors of 'profit' not recorded yet. They have been sold and would likely be recorded in the 2H 2019. The estimates of the amount to be obtained is probably 5-6 million before fees involved in the partnership.

The estimates of proceed do not fall short of my own layman estimates as well.
Given a ballpark conservative estimate of 4 million in the 2H, this would equate to roughly 6.8 cents sgd.

-The 3rd project (K83), another office building in Hong Kong is slated to complete by 2019. According to management, it seems likely that some gains would be recorded this year. Having made a convenient trip down to proof read my eyes that the building does exist and match to the photos seen in the presentation slides, i would say that it is more than likely this building would be completed this year.

Both projects would likely be a key driver in the dividend for 2H 2019 should there be no recognition in the 2nd quarter. 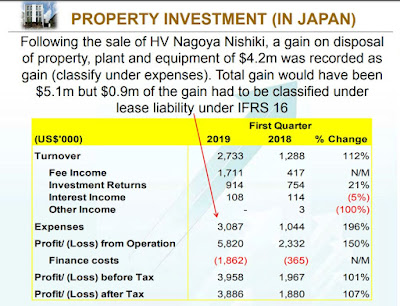 -Results mainly boosted by a one-off sale in Feb 2019 of Hotel Vista Nagoya Nishiki, which is not a surprise as it has been mentioned in the annual report of Uni- Asia as well in previous posts following takeaways of the AGM. Following which there are no hotels that are owned by the group, which means that such one-offs will not happen.

-Notwithstanding that, 3 Alero projects were sold in 1Q 2019 and had contributed to the bottom-line. Though 2Q would likely see only 1 project being sold and should have a lower contribution from this segment. 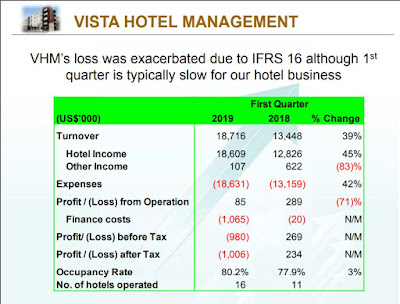 -Having gone thru the new lease accounting, it is estimated that roughly 2.4 million USD would be added to the expense this year due to the new accounting rules.

-Profitability of the hotels business would be a loss of 100k-300k if the accounting rules been not counted.

- A pleasant sight would be an improve in occupancy rates despite a higher hotels operated and it has been guided previously that 1Q is usually the worst quarter for its hotel business.

-With the golden week in Japan, 2Q would usually be stronger and it remains to be seen how the results come in.

Personally i would still estimate the hotel management side to record a loss this year as a result of the leases expense.

-2H 2019 should be better than 1H 2019, on the pure basis that the recognition of profits from 2nd and 3rd project in Hong Kong

-Cyclical nature of shipping sector affecting bulk rates is a factor not in the control of the company.

-I would look forward to the mid year dividend. If asked to estimate i guess it would be 2 cents sgd hopefully. As they target to pay a dividend equivalent to the minimum of 35% of profit for FY 2019.


As usual, at the end of my post there would be K-Pop pictures.

TMI: My K-Pop addiction has risen multiple fold this year, but its probably the most crucial thing that is driving me in continuing investing to fund my hobby(which is spending on concerts and K-Pop related). 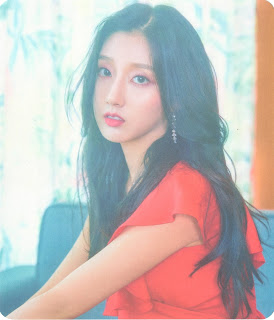 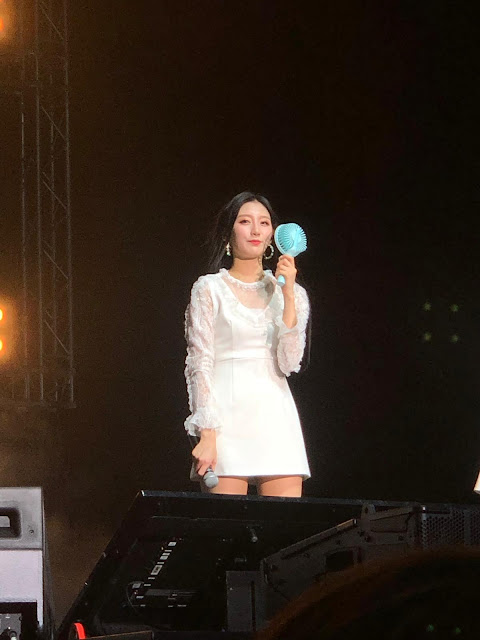 Don't be surprised if the pictures are reused, for pictures are limited just like how one's capital/war chest is.
Posted by zzxbzz at 04:02