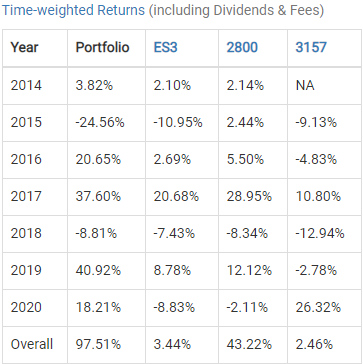 3157 being the HK Small Caps Tracker

Given what has happened throughout the year to the world, to the people around me and to myself.....I would say this is a good year. Entered the year being <50% cash as well which definitely means firing has to be more cautious.

Of course the 18.21% is inflated as my largest holding stock went ex-dividend and there was no drop in price (due to lack of volume) despite a dividend yield of around 9%. Hence i would say the more accurate figure would be around 14-15%.

I am a net spender this year as well as i bought more than i sold. Unfortunately despite a record spending this year, returns have not been as high as what i see from others lol. Most of my losses came from large caps, probably a sign i should have more holding conviction/ avoid large caps for myself. On the XIRR front, it is largely similar to the time weighted returns.

Most of the returns came in December. Without December returns would be at about 8%. Interestingly enough, i was contemplating adding some of my positions up till the last day as i believe that they are still undervalued. However for easier accounting, i decided to push back a little longer.

Made a tiny donation to show some gratitude....its just a real tiny amount. 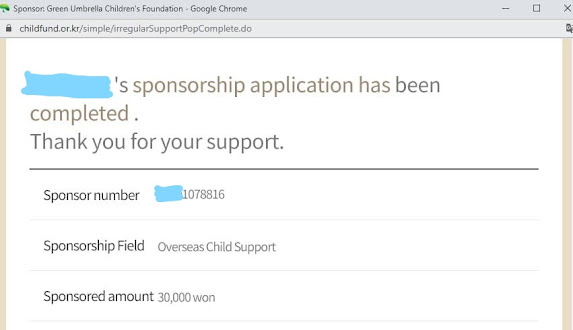 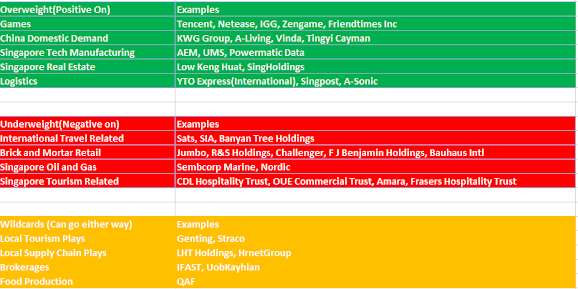 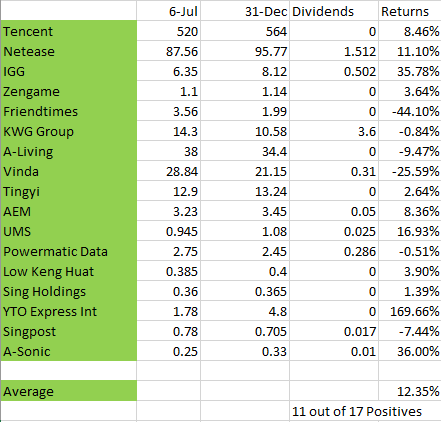 I have to apologize as i was not as accurate in expecting what would happen in the 2H 2020. Though more than half performed positively, the returns are not as high as i thought it would be.

The conclusion I get from this experience is that small caps in general have more potential then large caps. Although they are also the ones responsible for the largest negative returns.

What i learnt this year

Being through the previous kind of down market scenarios like the oil price crash, china penny stock market crash and the trade war fears. This is the first time a down market scenario is due to people's lifestyle has been affected. As such different opportunities start arising compared to the previous scenarios which did not affect a person who is not invested as much. As such, those who adapt to the scenarios will be rewarded in the short-run. In the long-run it remains to be seen although folks could have just clocked out their returns as it is largely rewarding to adapters.

I would tell the story via a stock i held.

For background information purpose, Tat Seng Packaging is a company that does corrugated packaging in Singapore and China.

Most of its revenue comes from China.

It is also part of the top 50 packaging companies in China. It is a counter that i have held since November 2017. 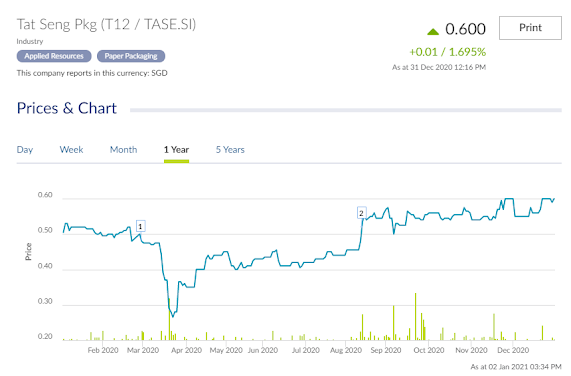 In February, Covid Cases starting popping up across the world while China is in a lockdown. However, Tat Seng Packaging's stock price did not decline much. It released its result at (1) and as expected it was bad as corrugated prices were way higher in 2019 and declined sharply in 2020. However, the stock price did not immediately drop by a lot even though dividend was cut by 50%.

In March, along with the global stock market decline, Tat Seng hit bottom at 25 cents. This was where all the doom and gloom was around and people are saying things like Covid 19 will take away all the lifes and investing probably does not matter as much and sort of stuff like that.

But China eventually recovered and it was until June when the agm questions was answered then people knew that the operations of Tat Seng were ongoing all along. Then, it presented a really good set of half year results in August. Recording an increase in profit even if other income was not being counted. This propelled the company to close at a price that was higher than it was at the start of the year when covid was not as known to large number of the population.

Hence, business doing well is key as this is what would drive recovery. Fear is real, its normal to feel fearful as its part of human nature. I felt fearful as well. More research would have helped instead. On the company front, the lack of disclosure probably did not help much as well.

3) Returns do not say the full story (Obviously a Rant)

Many could have been saying things like returns being in 2 digit or 3 digit this year and so on. However there are more things that needs to be considered together.

a. What was the person's cash amount compared to his investment amounts? Obviously if you had 50k in investments and 500k in cash then your returns would have done well if you had bought in this year.

b. Was your salary affected this year? Well this plays a part in affecting your lifestyle and therefore would have affected your investing mindset if your daily lifestyle is affected.

c. How has your returns been before this year? A longer track record would be much better in predicting returns. Rather than a flash out of the pan.

I would probably just add into some of my positions i currently am holding as I believe they would perform well and are still undervalued. Of course cash level is a consideration as it is currently lower than the start of 2020. Also I have to factor in sudden IPO participations, possibility of a large ticket purchase, possible travelling opportunities should they arise as well as averaging down conviction picks that can get sold down.

A non-investing takeaway i find more important would be that when presented an opportunity to do something, telling yourself 'Its too expensive' is probably the most lousiest excuse to detract yourself from doing it. This is because the opportunity might never come again. I probably regretting not doing more in 2019 after whatever happened in 2020. I am not sure if i have the chances of doing it again anymore. Which is more depressing since the point of earning money from stocks is to be able to enjoy life more without worries.